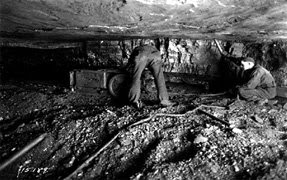 It was always said that robbing the pillars was one of the most dangerous jobs in the mine.

THE PERILS OF A MINE

Thrilling Experience of Sixteen Miners in a Colliery

Shamokin, Pa. Sept. 27---For eight hours sixteen men were imprisoned in an old chamber in the Hickory Ridge coal mine, not knowing what second they would be crushed to death. They were Carson Delong, Zach Hann, Frank Walthoff, Daniel Oyster and a dozen Hungarian and Italians.
When they entered the mine in the morning Foreman Reinhardt directed them to rob pillars. This is consider3d the most dangerous of inside work. A pillar divides one breast or chamber from another, and after all the coal is taken from the chamber the pillar is usually removed.
An hour after the first pick had been sunk into the coal the miners then were startled to find that the bottom of the gangway was cracking in hundreds of places, while trough the fissures came a blast of air an dirt. A violent swaying then ensued mingled with the sudden roar and crunching of coal. Then came a succession of reports, like artillery batteries going off.
“Boys” shrieked Hann, “The chain filler must be running, and if we don’t get out of here it means death.”
A rush was made for the closest chamber. Wolhoff was in the rear and was lifted tot eh ledge in safety just as the bottom of the place they had left dropped and revealed a yawning chasm 100 feet deep and 90 feet wide. When the pillar began to disappear the men on the lower level escaped.
The imprisoned men were surrounded on all sides by falling coal. They went up the chamber as far as possible and had a conference. They found that there was no possible way out other than by the way they had entered. But there was an impassable chasm between them and it. Suddenly they heard voices.
“Are you alive” cried foreman Reinhardt, who, with Tom Llewellyn and David Williams, had gained entrance to the gangway as soon as the rush of coal occured. The rescuing party was overjoyed.
How to get the miners across the abyss was next in order. A rope was procured and for four hours Reinhardt and his men tried to cast an end across. Sometimes it would land on a treacherous ledger almost within reach, and then it would go whistling down in darkness and dust.
Once it fell on a rock which seemed solid, but Dan Oyster was about to seize it, the rock and rope went down. The men then grew timid and glanced into each others faces with fear. They were almost without oil for their lamps, and had only what was in their cans. Was it to be a second Jeansville Horror, and yet within shouting distance of rescuers?
These gloomy meditations were cut short by a whirling noise and the crack of a whip. The prayed for rope had fallen at their feet.
“Fasten your end of the rope to a timber,” they heard the voice cry, “And we will do the same.”
Once securely tied about a post, the men consulted as to who would make the first attempt to cross the chasm hand over hand suspended from the rope. It was a perilous undertaking, but as the way lead to liberty it did not take long for Carson Delong to make up his mind to try it. Bidding his comrade’s goodbye the intrepid fellow flung himself into space and he went hand over hand.
The rope cracked and swayed. Several times he thought he would fall, but with strained muscles and stout heart Delong went on and on, and at last was safe. The others followed, and when the last had crossed they first wept like children and cheered loud and long. When they were hoisted to the surface 2,000 persons cheered and danced with joy. 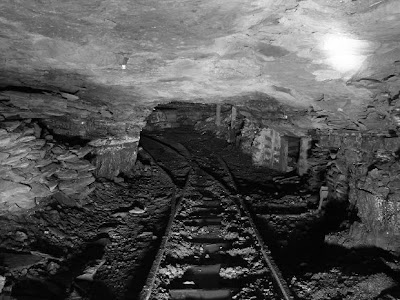 The Luzerne County Historical Society in Wilkes-Barre, PA is looking for images, documents, etc. relating to the Irish in Luzerne County for an upcoming exhibit. Of special interest are images of the East End section of Wilkes-Barre, Mackin's Store on Scott St., and the legendary "Minstrel of the Mines" Con Carbon. Contact mrkburke@luzernehistory.org

Stu Richards
My interests are Aviation, military history, Early Baseball and anthracite coal mining. My interest in military history deals with what the common soldier, sailor, marine and airman experienced during peace time or war.I enjoy old aircraft their systems, equipment and operations. I have published four books two on military history. "Pennsylvanian Voices of the Great War".McFarland Press and "The History of Company C 50th Pennsylvania Veteran Volunteer Infantry, from the camp, battlefield and the prison pen, " The History Press. My coal mining books include, "Early Coal Mining in the Anthracite Region," Arcadia Press and "Death in the Mines", The History Press. I served for four years in the USAF as an aircraft mechanic working on many different types of aircraft. I served for 13 months in Vietnam while working and flying on the C7A Caribou. I also worked as an Air Traffic Controller in the PANG. I started my work career after the military as an aircraft mechanic for the US Gov't working on Ch-47, OH-6, OH-58 U-8 and U8-F aircraft. . 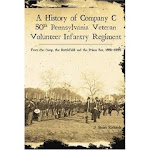 If you are interested in getting a copy of my book "A History of Company C 50th Veteran Volunteer Infantry Regiment "I am offering it for sale at the 1/2 price of $10.99 and $3.00 shipping.
Just contact me @
Stu483@verizon.net 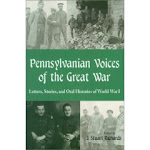 Pennsylvanian Voices of The Great War 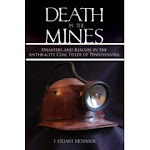 Death in the Mines